This plump game bird is a member of the family Tetraonidae(“grouse”), a group which ranges widely across Europe and North America. White-tailed Ptarmigan are currently represented by 5 different subspecies globally. 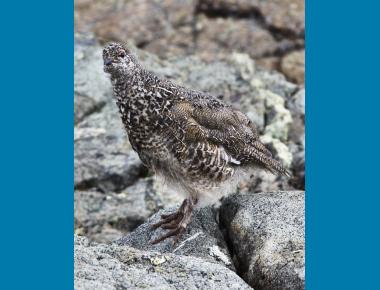 Height: 30-33 cm. The smallest ptarmigan in North America, adults of the saxitalis subspecies of White-tailed Ptarmigan are chubby and round. Eyes and beak are black. As with other ptarmigan, White-tailed Ptarmigan have a cryptic molt pattern that changes according to season and breeding cycles. In winter the bird is completely white except for the eyes and beak. As spring approaches and snow levels diminish with lengthening daylight and increasing temperatures, birds morph from all white to intermediary mix of white and mottled grey-brown. A complete transition to breeding plumage of mottled grey-brown with only the retrices (outer margins of tail feathers) remaining white occurs in the summer. The feathered feet (another trait of ptarmigan) remain covered in white feathers all year. A very small red eyebrow patch is visible in summer. Eggs are a buff colour with small, dark-brown spotting. Both eggs and seasonal molt patterns are effective year round camouflage for this bird which nests and forages in open, exposed and often rocky high elevation habitats. Considered endemic to Vancouver Island, the saxatilis subspecies was first described in 1938. It differs from its mainland counterpart through subtle morphological differences in the bill and plumage.

Several species of ptarmigan occur on Vancouver Island. The white retrices remain one of the key characteristics for identifying the saxitalis subspecies, especially during seasonal molt changes. Rock Ptarmigan is similar in size and shape to White-tailed Ptarmigan, but the tail margins are distinctly black and males have a black line from the bill to the eye. Willow Ptarmigan are slightly larger than White-tailed Ptarmigan, have a reddish head and distinctly black retrices. The distinct red “eyebrow” is more visible in other ptarmigan species than in Lagopus leucura and its subspecies.

Elevations: Summer 1200-2200 m, winter 800-1900 m. This subspecies migrates seasonally between montane, subalpine and alpine zones of the central mountain ranges of Vancouver Island. Historical distribution ranged from as far south as Mount Brenton to as far north as Tsitika Mountain. Recent inventory of sightings suggests the subspecies still occupies most of its historic range.

Habitat elevation ranges differ between breeding (summer) and winter seasons, and between the south, central, and north parts of Vancouver Island. In summer birds can be found at, or above the timberline in alpine, subalpine and upper montane areas with moist and rocky alpine meadows. Small “krummholz” ( stunted, twisted upland tree “islands” formed in harsh growing conditions of sub-alpine fir and mountain hemlock). In winter birds move downslope to snowfields, which provide camouflage and forage vegetation. Short elevational migrations to habitat below the tree-line and into, or at the edge of forested areas are made periodically. Features include yellow cedar and mountain hemlock forests, alpine bowls, clearcuts, cliffs, rocky outcrops and non-vegetated areas. Nests are exclusively on the ground in hollows of high elevation rocky exposed areas or under trees and shrubs. The distance that adult birds migrate between winter locations and breeding areas is on average 1.4 km in the southern portion of the island and 2 km in the northern portion of the island. Young of the year have been known to disperse up to 34 km to other mountains.

Depending on time of year and availability, White-tailed Ptarmigan feed on buds, stems, seeds, leaves, fruits, flowers, and insects. Forage plants for the saxitalis subspecies of White-tailed Ptarmigan include a range of fruiting high elevation plant species such as blueberry, grasses, sedges, sedum, crowberry and bearberry.

Breeding occurs in the spring. Nesting on Vancouver Island begins in early June to mid-July. Nests are located on the ground and incubation period is 22 to 26 days. Following the nesting period, the females and young move to slightly higher elevation summer habitat. Birds migrate to lower elevations in winter.

Distribution is restricted to higher elevations associated with specific forage plants in highly fragmented habitats (i.e. montane, subalpine and alpine zones).
Fragmentation creates migration barriers for seasonal range use and juvenile dispersal. Climate change may further reduce or impact extent and diversity of preferred habitats.
Limited recruitment and low population densities. Breeding success is limited by seasonal availability of food resources and subject to fluctuating conditions.
Fragmentation and loss of habitat due to pressures from forestry as well as expanded recreational land use (ski hill development, hiking, mountain-biking and snowmobiling).
Increase spread of predators and non-native flora and fauna due to increased road development from human activities such as recreational land uses and forestry.
Regional air and water pollution is an increasing concern for high elevation species. Concentrations of persistent organic pollutants (POPs) such as polychlorinated biphenyls (PCBs) in alpine snowpacks increase in higher elevation areas in Western Canada.

Apply conservation and management objectives as set-out in the “Accounts and Measures for Managing Identified Wildlife – Accounts V. 2004 Vancouver Island White-tailed Ptarmigan Lagopus leucura saxatilis.” Inventory and monitoring resources include standardized methods from Provincial RISC standards # 17, Upland Gamebirds Grouse, Quail and Columbids, Version 1.1. For further details on conservation and management objectives for this species, please consult the noted resources and references provided or contact provincial and federal agencies. This species is listed under the federal Species at Risk Act (SARA) and is subject to protections and prohibitions under the BC Wildlife Act and is Identified Wildlife under the Forest and Range Practices Act. Habitat for this species may also be governed under provincial and federal regulations including the Fish Protection Act and Federal Fisheries Act as well as Regional and local municipal bylaws.

Where are the White-tailed Ptarmigan on Vancouver Island?
A summary of observations by hikers and naturalists

White-tailed Ptarmigan (Lagopus leucura): A Technical Conservation Assessment
Prepared for the USDA Forest Service, Rocky Mountain Region, Species Conservation Project
For further information see:
BC Species and Ecosystems Explorer: Species and Ecosystems Search
A source for authoritative conservation information on thousands of plants and animals and hundreds of ecological communities in BC. From here connect to all provincial and federal recovery plans (including the SARA Registry), COSEWIC (Committee on the Status of Endangered Wildlife in Canada), Identified Wildlife guidance and conservation requirements for specific species and ecological communities of conservation concern impacted by forestry activities) and links to E-Flora and E-Fauna (the Electronic Atlas of the Plants and Wildlife of British Columbia).
Develop With Care Guidelines (see Lower Mainland Region section)
Environmental guidelines for urban and rural land development in BC.
Species at Risk & Local Governments a Primer for BC
Learn what species are at risk in your area, search by name, habitat type, regional district and forest district.

First edition prepared in 2010 by Pamela Zevit RPBio for the South Coast Conservation Program (SCCP) with , in partnership with: International Forest Products (Interfor), Capacity Forestry (CapFor). Original funding was made possible through the Sustainable Forestry Initiative (SFI) Revised 2015 by Isabelle Houde, RPBio in consultation with the SCCP.

This project was undertaken with the financial support of the Government of Canada. Ce projet a été réalisé avec l’appui financier du Gouvernement du Canada. Every effort has been made to ensure content accuracy. Comments or corrections should be directed to the South Coast Conservation Program: info@sccp.ca. Only images sourced from “creative commons” sources (e.g. Wikipedia, Flickr, U.S. Government) can be used without permission and for non-commercial purposes only. All other images have been contributed for use by the SCCP and its partners/funders only.