A member of the family Bufonidae (“true toads”), true toads are toothless and generally “warty” in appearance and have a “parotoid” gland that excretes an alkaloid poison “bufotoxin” when the animal is stressed. 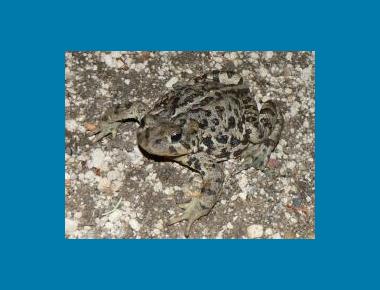 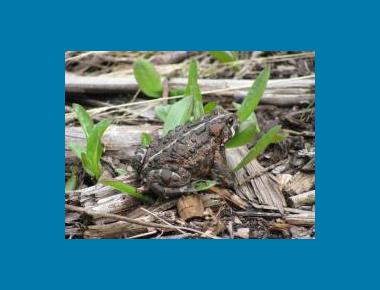 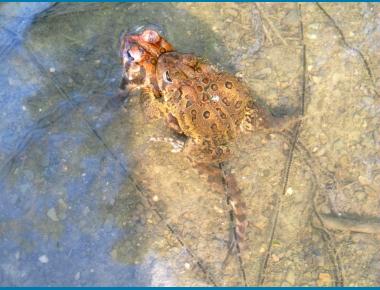 Length (snout to vent): Males 6-11 cm, Females 12.5 cm. Toads have soft, somewhat dry, bumpy skin. Adult Western Toads tend to be stout with thick forelimbs. Colour ranges from tan to light brown, grey, or greenish on top. Markings are a few dark spots to extensive mottling, warts may be reddish. A thin, cream coloured dorsal stripe runs down the centre of the back (most prominent in mature females; may be absent or inconspicuous in juveniles), which may have reddish warts. The oval-shaped parotoid glands behind the eyes are discernable, even in recently metamorphosed toads (“toadlets”). The glands excrete a mildly toxic substance used to ward off would-be-predators. The hind feet have horny tubercles used for burrowing and are yellowish or orange in juveniles. Males are smaller with narrower head, longer forearms and dark nuptial pads on thumbs. The nuptial pads are used while grasping females during breeding in a position known as “amplexus”. Males lack vocal sacs but may produce repeated chirping sounds if grasped by hand (females usually are silent or emit few chirps). Tadpoles are black or dark brown and relatively small (1.2-3 cm, 2.5-3 cm total length prior to metamorphosis). The snout is square and the eyes are set about midway between the dorsal midline and edge of the head. The tailfin is narrow compared to tadpoles of species like Northern Red-legged Frog and may be heavily speckled with gray or black. 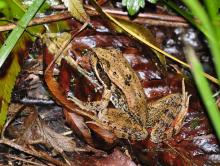 Juvenile toads (“toadlets”) could be confused with the juvenile Northern Red-legged Frog or Coastal Tailed Frog, especially where distribution of these species overlaps. Western Toad tadpoles have been found associated with fast flowing streams similar to those utilized by Coastal Tailed Frog tadpoles, which can also be black and similar in size in early stages of growth. Rearing in flowing water habitats, while unusual, may reflect localized adaptations by some Western Toad populations.

Elevation: Sea level up to 3660 m. Western Toad is found from the east slope of the Rocky Mountains to the Pacific Ocean and from northern Baja California to Alaska and the Yukon. This species is widely distributed throughout the Coast Region including coastal islands. While many frog species are confined to lower elevations, Western Toad can be found at elevations above the snow line. Several major toad migration events (usually juveniles in conjunction with road conflicts), have been documented in the Fraser Lowlands of the South Coast (Ryder Lake area in Chilliwack, Stokkes Pitt in Surrey/Langley) as well as on Vancouver Island (Pup Creek north of Courtenay on the Island Highway). Historically this species was much more common throughout the Lower Mainland’s Metro Vancouver Region as well as the Capital Regional District on Southeast Vancouver Island. Recent declines may also be occurring on Haida Gwaii.

This species is often found in and around shallow ponds, lake margins, slow-flowing streams, marshes, bogs or fens, with adequate riparian communities. Adults utilize a wide variety of habitats, including wet and dry forest types, fields and meadows, clearcuts and aquatic sites. Roads, dikes and ditches are utilized as movement corridors, and they tend to avoid open water outside of the breeding season. This species is capable of significant overland movement between breeding ponds, upland summer ranges, and overwintering areas. Adults have been found 1 to 2 km away from breeding sites during the spring and summer. Distances of 5 km between breeding sites have been identified in some populations, with toads moving as much as 7.2 km. Open water, often vernal pools are used for breeding. All members of a local population tend to lay their eggs in the same location, which is used repeatedly from year to year. Toadlets disperse to terrestrial habitat en mass, forming large, post-metamorphic aggregations. Hibernacula can be communal, but are often individual dens dug in streambanks, under downed wood, or using burrows of other animals (e.g. rodents and moles).

Western Toad juveniles and adults are opportunistic predators exploiting a range of invertebrates including annelids (worms), terrestrial and aquatic insects and spiders. Small crayfish and mollusks may also be consumed. Tadpoles are herbivores, feeding on aquatic plants, detritus and algae.

All male toads possess a “Bidder's organ”. Under the right conditions the organ becomes an active ovary and the toad, in effect, becomes female. Sexually mature between 2-6 years; females may reproduce only every 1-3 years, possibly only once in their lifetime, males may breed more than once per year. Females lay up to 12,000 eggs, usually in shallow water typically 15 cm deep, usually no deeper than 30 cm. The warmth of shallow water increases the rate at which eggs develop. Spawning in shallow water with vegetative matter may also reduce potential predation on eggs by fish. Eggs are black, about 1.5 to 1.8 mm diameter, and are laid in long strings of “jelly” in rows of two (sometimes three). Adult Western Toads can live 9 to 11 years (up to 35 years recorded in captivity).

Habitat loss and alteration due to urbanization and forest activities. Distribution coincides with areas undergoing rapid development.
Extirpation of local populations due to fragmentation or alteration of habitat connectivity between breeding areas and upland seasonal nonbreeding habitat.
Alteration of microclimate regimes and hydrological regimes in riparian and upland forest areas used for dispersal, foraging and overwintering due to forestry and other resource extractive activities.
Vehicle mortality and population fragmentation due to roadways that cut through core habitat areas, or migration corridors that lack appropriately sighted exclusion fencing and amphibian or wildlife passage structures.
Increased predation and competition through augmentation or stocking of sport fish (e.g. trout), and introduction of nonnative fish species, especially into non-fish bearing amphibian breeding sites.
Cumulative impacts from disease. In particular Chytridiomycosis caused by the chytrid fungus Batrachochytrium dendrobatidis and linked to dramatic population declines of amphibian species in western North America.
Direct mortality or sub-lethal impacts from fertilizer and pesticide applications in urban and agricultural areas as well as for silviculture management.
Alteration of wetland habitat from vegetation and hydrology shifts from climate change.

Apply conservation and management objectives as set out in the Management Plan for the Western Toad (Anaxyrus boreas)in Canada (2016) and “Best management practices for amphibians and reptiles in urban and rural environments in British Columbia”. Integrate complementary objectives, recommendations and assessment methods found in the “COSEWIC assessment and report on the western toad Bufo boreas in Canada” and “Research priorities for the management of the Western Toad, Bufo boreas in British Columbia.” Inventory and monitoring resources include standardized methods (Resource Information Standards Committee) # 37 Inventory methods for pond-breeding amphibians and Painted Turtle (Version 2.0), “Measuring and monitoring biological diversity - Standard methods for amphibians” and “Suitability of amphibians and reptiles for translocation”. For further details on conservation and management objectives for this species, please consult the above noted resources, references provided or contact provincial and federal agencies. This species is listed under the Federal Species At Risk Act (SARA) and is subject to protections and prohibitions under the BC Wildlife Act. Habitat for this species may also be governed under provincial and federal regulations including the Fish Protection Act and Federal Fisheries Act as well as Regional and local municipal bylaws.

A Pocket Identification Guide for Frogs and Toads
A handy guide to our local frogs developed by Monica Pearson of Balance Ecological (excludes Pacific Tailed Frog).
For further information see:
Develop With Care Factsheet 13 Western Toad
BC Frogwatch Program - Western Toad
Toad blocks' shut down B.C. roads for migration
Loads of Toads! Western Toads near Lillooet, BC (toadlet emergence and migration)
BC Species and Ecosystems Explorer: Species and Ecosystems Search
A source for authoritative conservation information on thousands of plants and animals and hundreds of ecological communities in BC. From here connect to all provincial and federal recovery plans (including the SARA Registry), COSEWIC (Committee on the Status of Endangered Wildlife in Canada), Identified Wildlife guidance and conservation requirements for specific species and ecological communities of conservation concern impacted by forestry activities) and links to E-Flora and E-Fauna (the Electronic Atlas of the Plants and Wildlife of British Columbia).
Develop With Care Guidelines (see Lower Mainland Region section)
Environmental guidelines for urban and rural land development in BC.
Species at Risk & Local Governments a Primer for BC
Learn what species are at risk in your area, search by name, habitat type, regional district and forest district.

Rithaler, R. 2003. [Unpublished] Amphibian inventory and management windows for the corporation of Delta. -

2nd Edition 2014 by Isabelle Houde, RPBio in consultation with the SCCP. Content updated by the Pamela Zevit April 2017