A member of the family Emydidae (“pond or marsh turtles”), the Chrysemys genus is restricted to North America. In BC, C. picta occurs as two populations (Pacific Coast and Intermountain – Rocky Mountain). 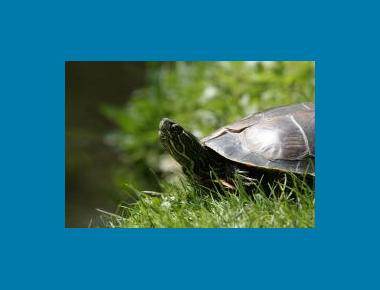 Size (shell diameter): Hatchlings 2-2.5 cm, Juveniles 10cm, Mature adults 25 cm (females larger than males).  The carapace (upper shell) of adults is smooth, olive-green to dark brown. Outer edges can be patterned with red lines. The head, neck and tail are olive to greenish-black and striped with yellow. The intricate black and yellow branching pattern on the plastron (lower shell) is not present on all individuals, though the plastron is always red or orange. Colour patterning can be variable between individuals and between populations. The upper jaw has a notch located just under the nostrils. Males have very long front claws and thicker tails with a cloacal (tail vent) opening that is closer to the end of the tail than to the carapace. Females have shorter front claws, and thinner tails with cloacal openings  closer to the carapace than to the end of the tail. Hatchlings have rounder carapaces that are slightly keeled along the length and similar but more vibrant colouration than adults. *In 2003, DNA studies suggested that the Eastern, Midland and Western North American  subspecies of Painted Turtle should be merged to just a single species (C. picta), leaving only one other separate species in the southern US.

The non-native, introduced Slider (also known as “Red-eared Slider”) is commonly misidentified with Western Painted Turtle. Both have similar physiology, colouration, size and lifecycles. Slider has a red “ear” patch located behind the eye which can fade on older Slider’s, making identification more difficult as they mature. Slider turtles have a yellow plastron with dark circular blotch on each plastron scale. The carapace can have more visible colour patterning and splashes of colour than painted turtles. It is slightly more dome-shaped with a low ridge or keel (lacking in carapaces of mature Western Painted Turtle).

Elevation: 0-500 m (some US populations have been documented at 2100 m). Populations on South Coast BC are known from 0-200 m. Western Painted Turtle are the remaining native freshwater turtle species on the BC Coast. The Pacific Coast Population ranges from the Fraser Lowlands, Sunshine Coast, Squamish and southeast Vancouver Island area. The largest population of genetically intact individuals on the Lower Mainland occurs near Deroche (west of the Harrison River). A number of individuals and remnant populations can still be found in urban watersheds like the Brunette basin in Burnaby, watersheds in southwest Coquitlam, Langley, Surrey and Delta. Populations are also known from Vancouver Island in the Greater Victoria area to the Alberni Valley, Courtenay and Comox. Saltspring Island appears to be the only Gulf Island with populations, however surveys on Galliano and North Pender Island were inconclusive and the species could be more widely distributed where suitable habitat occurs.

This species is found in slow-moving, permanent waterbodies with soft bottom substrates, ample aquatic vegetation and adjacent areas of exposed sand or gravel soils suitable for nesting. There is a strong relationship between population viability, adequate riparian buffers and non-fragmented dispersal corridors (i.e. between aquatic habitats). Populations on the Sunshine Coast overwintered at depths >1 m. Deeper sites have lower probability of freezing and lower predation risk, but higher probability of oxygen depletion. Painted Turtles display very high tolerance to hypoxic and anoxic (oxygen depleted) conditions, but do not resist freezing and are susceptible to predation. Overwintering ends when water temperatures reaches about 6 °C. Nesting sites vary considerably in distance from the water (up to 150 m away). This species may seek out nest sites near buildings, fences or road verges. These sites are often disturbed, more vulnerable to predation, vehicular mortality, illegal collection, and result in lower nesting and hatchling success. Solar radiation is required to maintain metabolic rates and absorb vitamin D3, for calcium uptake. Adjacent upland areas with good sun exposure (e.g. south aspects), and loose sandy soils for nesting are equally critical. Temperature affects sex determination. Sex ratio imbalances can be induced if optimal sites are destroyed or made inaccessible with mostly females being born at temperatures of 29°C and up and mostly males below that.

An opportunistic omnivore, this species feeds on various aquatic plants, invertebrates (zooplankton,worms, aquatic insects, crayfish) and vertebrates (tadpoles, small fish), as well as carrion. Prey items are taken from the surface, mid-column or bottom of aquatic foraging areas as well as adjacent terrestrial and foreshore zones. Western Painted Turtle have a fixed tongue and consume food underwater to keep it saturated and assist in swallowing. Young turtles are more carnivorous, switching to a more vegetation based diet as they age.

Sexual maturity takes 4-5 years in males and 7-9 years in females. Females lay 6-18 eggs in shallow nests (7-10 cm in depth) built on south-facing sites with loose soil, relatively free of plants, roots,and rocks. Eggs are covered with soil, compacted by the females’ feet and plastron and camouflaged with vegetation and debris. Hatchlings emerge around September, generally staying within the nest cavity until the following spring. Females reproduce every second year, sometimes with multiple males per clutch and can store sperm for up to 3 years. Juveniles that survive to maturity experience much higher survival rates. This is one of the longest lived North American reptiles (30+ years).

Habitat loss and alteration due to urbanization. Distribution coincides with areas undergoing rapid development causing draining and infilling of wetlands, and hydrological disruption to surface and groundwater.
Alteration of wetland habitat from vegetation and hydrology shifts from climate change.
Population fragmentation and barriers in migration corridors due to roadways. Vehicle mortality impacts (10% annual mortality in eastern U.S) from not appropriately sighted roadways and lack of well monitored exclusion fencing with wildlife passage struct
Disturbance to nesting and basking sites from recreational activities and off-road vehicles.
Inter-species competition, predation and potentially disease transmission from introduced Slider turtle as well as Bullfrog.
Degradation of nesting beds from Invasive plant species (e.g. introduced grass and legume species). Can cause direct • mortality through root penetration into eggs and hatchling entanglement.
Hooking mortality from angling.
Harvesting, collection and non-permitted trapping by the public.
ncreased predation with increase in human settlement near core habitat (free ranging or feral domestic pets).
Cumulative impacts and direct mortality from contaminated runoff and non-point source pollution through all life history phases.
Combined to these threats, natural reproductive and hatchling-to-adult survival rates are low as are dispersal capabilities, reducing capacity to recover from local extirpation events.
Genetic swmaping from interbreeding with illegally imported and released Midland Painted Turtle

Apply conservation and management objectives as set out in “Recovery Strategy for Western Painted Turtle (Pacific Coast population) (Chrysemys picta bellii) in British Columbia (in draft available from the recovery team chair) and Develop With Care “BMP for Amphibians and Reptiles in Urban and Rural Environments in British Columbia (2014)”. Integrate complementary objectives developed by the South Coast Western Painted Turtle Recovery Project and the Coastal Painted Turtle Project (see sources section for specific documents). Inventory and monitor using standardized methods (Resource Information Standards Committee) # 37 Inventory Methods for Pond-breeding Amphibians and Painted Turtle (Version 2.0) . Other recommended approaches to inventorying and monitoring include: “Measuring and Monitoring Biological Diversity - Standard Methods for Amphibians”, “Suitability of Amphibians and Reptiles for Translocation” and survey methodologies developed for the “Wetlandkeepers Handbook”. This species and its regional populations are listed under the Federal Species At Risk Act (SARA) and may be subject to protections and prohibitions under the BC Wildlife Act. Habitat for this species may also be governed under provincial and federal regulations including the Fish Protection Act and Federal Fisheries Act as well as Regional and local municipal bylaws.

Hibernating without oxygen: physiological adaptations of the painted turtle

Habitat Connectivity and Restoration Potential Assessment of Deer Lake Brook in Burnaby, BC
For further information see:
The Reptiles of British Columbia
Species at Risk - Coastal BC Conservation Organizations Collaborating on Stewardship: Western Painted Turtle
BC Species and Ecosystems Explorer: Species and Ecosystems Search
A source for authoritative conservation information on thousands of plants and animals and hundreds of ecological communities in BC. From here connect to all provincial and federal recovery plans (including the SARA Registry), COSEWIC (Committee on the Status of Endangered Wildlife in Canada), Identified Wildlife guidance and conservation requirements for specific species and ecological communities of conservation concern impacted by forestry activities) and links to E-Flora and E-Fauna (the Electronic Atlas of the Plants and Wildlife of British Columbia).
British Columbia’s Coast Region Species & Ecosystems of Conservation Concern

Develop With Care Guidelines (see BMP's for Herptiles)
Environmental guidelines for urban and rural land development in BC.
Species at Risk & Local Governments a Primer for BC
Learn what species are at risk in your area, search by name, habitat type, regional district and forest district.

Species Profile prepared by: Pamela Zevit with Brent Matsuda for the South Coast Conservation Program (SCCP) in partnership with: International Forest Products (Interfor), Capacity Forestry (CapFor) and the Species at Risk & Local Government: A Primer for BC. Funding was made possible through the Sustainable Forestry Initiative (SFI): http://www.sfiprogram.org/

Every effort has been made to ensure content accuracy. Comments or corrections should be directed to the South Coast Conservation Program: info@sccp.ca. Content updated March 2015.

Image Credits: Western Painted Turtle: William Leonard, Western Painted Turtle (ventral view): James H. Harding, Slider turtle: Sea Turtle Flickr, Habitat: Calypso Orchid Flickr. Only images sourced from “creative commons” sources (e.g. Wikipedia,Flickr, U.S. Government) can be used without permission and for non-commercial purposes only. All other images have been contributed for use by the SCCP and its partners/funders only.