A member of the family Strigidae (“typical owls”), the genus Asio is known as the “eared owls”. One of the most globally widespread species of owl, it's absent only from Antarctica and Australia. 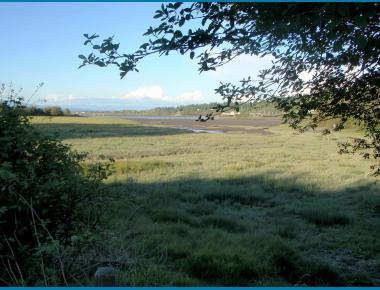 This “crow-sized” owl is diurnal (active during the day). Females are slightly larger than males (typical of most raptors), and considerably heavier, averaging 411 grams compared to 350 grams for males. Plumage is tawny-brown on the body with streaking on the chest and belly. Wings and tail are dark brown blotched with white, primary flight feathers are tan with black stripes. A distinctive black patch on the underwing occurs near the bend (wrist). The ear tufts are clumps of feathers and may or may not be visible depending on the owl’s ‘mood’. Feet are covered in short buff-coloured feathers. Dark eye orbits surround yellow eyes in a circular facial disc. Ear tufts are small and inconspicuous unless the owl is startled or defensive. Ear tufts may possibly aid in making birds more difficult to see in vegetation by breaking the line of the circular facial disc. The dark eye orbits with their distinct white edging may assist in cutting glare while hunting during the day. Juvenile owls are similar in colour to adults but retain more black on the facial disc until their first fall. The adults call is similar to the sound of a small dog barking.

Short-eared Owl overlaps in distribution with several other owls,some of which use the same or adjacent habitats for roosting or foraging. Barn Owl, Barred Owl and Long-eared Owl are typically observed in areas where Short-eared Owl occurs. However the diurnal foraging pattern of Short-eared Owl, distinct facial pattern and short ear tufts make it unlikely to be confused with these other species.

A near-distance migrant, breeding and over-wintering for this species occurs between the BC interior and the Lower Mainland. Migration may be driven by prey availability. In particular, the Fraser Estuary, Deer Lake (Burnaby), Colony Farm Regional Park, Pitt River floodplain and the agricultural areas of the Fraser Lowlands provide the essential old-field habitat and estuarine/freshwater marshlands utilized by this species. Periodically individuals may overwinter on southern Vancouver Island.

Short-eared Owl prefer open areas such as grasslands, meadows in early succession (some shrubs or trees), marshlands, sloughs, beaches, sedge fields and previously forested areas that have been cleared. Suitable winter habitat includes marine foreshores, grasslands, fallow fields, etc. with a sufficient prey base and adequate roost sites. While this species is an old-field/open grassland and marshland specialist, it is occasionally spotted in suburban areas where large old-field or grassland features exist (e.g. Deer Lake Park in Burnaby, Colony Farm Regional Park in Coquitlam/Port Coquitlam). Old-fields (5 years+) were found to be the most favourable habitat for Short-eared Owl and its prey Townsend’s Vole. Winter roosts have been reported in abandoned dumps, quarries, gravel pits, storage yards,stump piles, old fields and dunes. Unlike most owls that nest in cavities or take over abandoned nests of other birds, Short-eared Owls build crude nests on the ground. Nests may be lined with grass,leaves, twigs or feathers. In general, any area that is large enough, has low vegetation cover (preferably 30-50 cm in height) with some dry upland areas for nesting that supports abundant, preferred prey may be considered potential breeding habitat. Nesting areas are often near waterbodies.

This owl preys on native and introduced rodents including rat, mice, mole and vole species, especially Townsend’s Vole which often determines local density of adult birds. Songbirds may be taken when small mammals are scarce. As with Barn Owl, this species is susceptible to starvation during prolonged periods of snow cover. In the winter, Short-eared Owls congregate at sites that provide abundant prey opportunities. Birds forage primarily by flying low, typically into the wind, and dropping down onto prey, sometimes after a brief hover.

Generally courtship begins in mid to late March but was observed to begin as early as late February. Nesting cycle takes 7 to 9 weeks from initiation of nesting to fledging of young, and occurs from mid-March to Mid September depending on latitude.

Habitat fragmentation and habitat loss due to urbanization, industrialization and increasingly intensive agricultural practices. The Fraser River delta supports the largest winter population of Short-eared Owl in the province. This area has been, and cont
Decrease in availability of prey species (primarily voles) dues to the effects of land use and spread of invasive grasses in grassland habitats.
Hazards to ground nests and nesting sites due to fire, flooding of marsh or coastal habitat, farm machinery, intensive grazing around wetlands, and predators.
Mortality in adults due to shooting, collisions with cars, aircraft and entanglement with barbed wire.
Direct or sub-lethal mortality as well as detrimental effects to prey abundance and breeding success due to the use of pesticides in agricultural areas.

Apply conservation and management objectives as set-out in the “COSEWIC assessment and update status report on the Short-eared Owl Asio flammeus in Canada”. Integrate complementary objectives,recommendations and assessment methods found in “Accounts and Measures for Managing Identified Wildlife – Accounts V. 2004. Short-eared Owl Asio flammeus flammeus“ and “Best Management Practices for Raptor Conservation during Urban and Rural Land Development in British Columbia”. Inventory and monitoring resources include standardized methods RISC standards # 11 Inventory Methods for Raptors (Version 2.0). For further details on conservation and management objectives for this species, please consult the above noted resources, references provided or contact provincial and federal agencies. This species is listed under the federal Species at Risk Act (SARA) and is subject to protections and prohibitions under the BC Wildlife Act and is Identified Wildlife under the Forest and Range Practices Act. Habitat for this species may also be governed under provincial and federal regulations including the Fish Protection Act and Federal Migratory Birds Convention Act and Fisheries Act as well as Regional and local municipal bylaws.

SHORT-EARED OWL (ASIO FLAMMEUS) AND TOWNSEND’S VOLE (MICROTUS TOWNSENDII) DYNAMICS IN GRASSLAND SET-ASIDES
For further information see:
BC Species and Ecosystems Explorer: Species and Ecosystems Search
A source for authoritative conservation information on thousands of plants and animals and hundreds of ecological communities in BC. From here connect to all provincial and federal recovery plans (including the SARA Registry), COSEWIC (Committee on the Status of Endangered Wildlife in Canada), Identified Wildlife guidance and conservation requirements for specific species and ecological communities of conservation concern impacted by forestry activities) and links to E-Flora and E-Fauna (the Electronic Atlas of the Plants and Wildlife of British Columbia).
Develop With Care Guidelines (see specific raptor guidelines)
Environmental guidelines for urban and rural land development in BC.
Species at Risk & Local Governments a Primer for BC
Learn what species are at risk in your area, search by name, habitat type, regional district and forest district.

Species Profile prepared by: Pamela Zevit, RPBio. for the South Coast Conservation Program (SCCP) in partnership with: International Forest Products (Interfor), Capacity Forestry (CapFor) and the BC Ministry of Environment (BC MoE). Funding was made possible through the Sustainable Forestry Initiative (SFI): http://www.sfiprogram.org.

Every effort has been made to ensure content accuracy. Comments or corrections should be directed to the South Coast Conservation Program: info@sccp.ca. Content updated June 2016.Image Credits: Short-eared Owl: Marie O’Shaughnessy, Short-eared Owl close-up: A. Wilson, Long-eared Owl: Mindaugas Urbonas (Wikipedia), Habitat: Pamela Zevit. Only images sourced from “creative commons” sources (e.g. Wikipedia, Flickr, U.S. Government) can be used without permission and for non-commercial purposes only. All other images have been contributed for use by the SCCP and its partners/funders only.