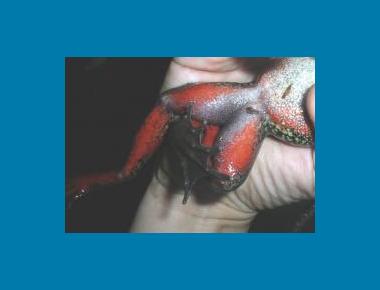 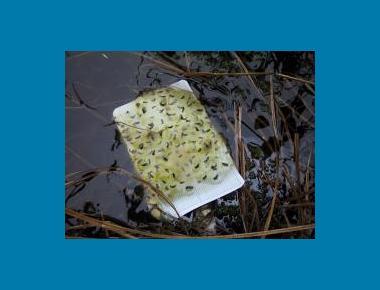 Snout to vent length 4-8 cm, females up to 10 cm. Colouration and patterning for both aquatic and terrestrial phases is extremely variable depending on time of year, age and geographic location. Dorsal colours range from tan, olive, and grey to a rich reddish-brown. The back and sides have varying levels of dark flecking, with small spots on the flanks and groin area. Hind legs have dark mottled banding (more so on the lower portion of the leg). The upper and lower lip, chin, chest and belly have various levels of mottling which becomes reduced and replaced by varying levels of red (especially on the groin and hind legs) as the frog matures. A dark eye-mask extends from the snout to around the eye and tympanum (eardrum) to the shoulder. Two light brown “dorsolateral” folds of skin run along the back from behind the eye to the groin area. Males develop a “nuptial pad” on each thumb to assist in gripping females (“amplexus”) during breeding. Tadpoles reach 2-7 cm before metamorphosing and are tan to brown with degrees of mottling and gold flecking throughout. The tail is at least as long as the body and the tailfin extends onto the back. 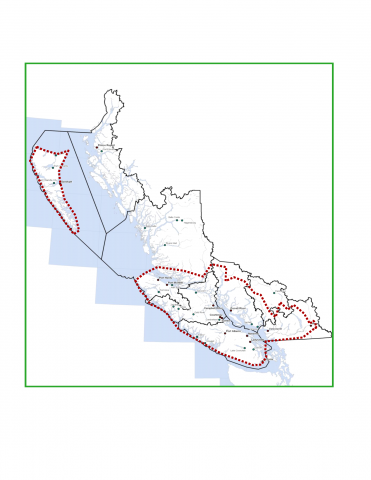 Occurs throughout the Pacific Northwest from northern CA followi ng the eastern crest of the Cascades north to BC’s Coast Region and west to the coast OR and WA. Elevation: 0-1400m (<500m on coast). Range includes the South Coast up to the southern portion of the Central Coast (Cape Caution). Vancouver Island comprises 50% of the Canadian population. Other populations occur on coastal islands in the Salish Sea as well as Haida Gwaii (likely introduced). One of the highest densities of terrestrial adults and juveniles known in Canada was found just south of Whistler in the Pinecrest area.

Found in and around shallow ponds, lake margins, slow-flowing streams and wetlands, especially with intact mixed or coniferous forest communities with mosaic of aquatic and terrestrial features. Avoids deep open water and areas with little shade or cover. Adults can be found well into adjacent forested areas as long as sufficient ground cover and moist micro-habitats exist. Breeding areas may be permanent or temporary and include ponds, lake verges, slow moving streams or river systems (3 meters wide or greater). Egg-masses are most numerous in ponds with over 30% forest cover, within 200 m from the shore. Breeding, overwintering and foraging sites can overlap. Northern Red-legged Frog can hibernates in water and in surrounding forests. Most locations are likely contiguous to some degree. Dispersal distances of several kilometres from aquatic environments into adjacent riparian and upland forests have been observed. Like Western Toad, this species displays high fidelity to breeding sites and many individuals may utilize the same migration pathways. Northern Red-legged Frog will utilize constructed wetlands such as stormwater ponds as well as drainage ditches.

An opportunistic feeder, this species feeds on a wide variety of insects and invertebrates (mainly through terrestrial foraging - aquatic organisms are also exploited). Tadpoles mainly feed on filamentous green algae.

Lethal temperature for eggs is below 4º C, and above 21º C; these thermal tolerance limits are the lowest for North American Ranid species. The 20-30 cm, gelatinous egg masses are submerged 30-90 cm to protect from direct sunlight and thermal extremes. Adult females reproduce each year, both sexes reach maturity by at three or more years of age

Habitat loss due to urbanization including draining and infilling of wetlands, and hydrological disruption of surface and groundwater.
Reduced dispersal due to habitat fragmentation and alteration in riparian and upland forests from forest activities.
Vegetation and hydrology shifts from climate change, and habitat alteration from invasive plant species.
Impact from roads including habitat fragmentation, mortality from vehicle collisions, habitat degradation and population isolation.
Predation by introduced Bullfrog, competition from introduced Green Frog and fish stocking in breeding sites for sport fishing.
Cumulative impacts from disease. Chytridiomycosis, caused by the chytrid fungus Batrachochytrium dendrobatidis, has been linked to dramatic population declines or even extinctions of amphibian species in western North America.
Direct mortality or sub-lethal impacts throughout all life history phases from fertilizer and pesticide applications in urban and agricultural areas as well as for silviculture management.

Apply conservation and management objectives as set out in the Management Plan for the Northern Red-legged Frog Rana aurora in Canada” (2017), and “Develop with Care’s BMP’s for Amphibians and Reptiles in Urban and Rural Environments in British Columbia”. Complimentary objectives can be found in “Accounts and Measures for Managing Identified Wildlife – Accounts V.2 Red-legged Frog Rana aurora aurora”. Inventory and monitoring resources include standardized methods (Resource Information Standards Committee) # 37 Inventory Methods for Pond-breeding Amphibians and Painted Turtle (Version 2.0), “Measuring and Monitoring Biological Diversity - Standard Methods for Amphibians”, “Suitability of Amphibians and Reptiles for Translocation” and amphibian survey methodologies developed for the “Wetlandkeepers Handbook”. For further details on conservation and management objectives for this species, please consult the above noted resources, references provided or contact provincial and federal agencies. This species is listed under the Federal Species At Risk Act (SARA) and is Identified Wildlife in BC and is subject to protections and prohibitions under the BC Wildlife Act. Habitat for this species may also be governed under provincial and federal regulations including the Fish Protection Act and Federal Fisheries Act as well as Regional and local municipal bylaws.

A Pocket Identification Guide for Frogs and Toads
A handy guide to our local frogs developed by Monica Pearson of Balance Ecological (excludes Pacific Tailed Frog).

Using amphibians to monitor effectiveness of variable retention harvesting
For further information see:
Develop With Care 2014 Factsheet 14 Red-legged Frog
Scroll down to bottom of DWC site to access factsheet
BC Frogwatch Program
Washington Herp Atlas
BC Species and Ecosystems Explorer: Species and Ecosystems Search
A source for authoritative conservation information on thousands of plants and animals and hundreds of ecological communities in BC. From here connect to all provincial and federal recovery plans (including the SARA Registry), COSEWIC (Committee on the Status of Endangered Wildlife in Canada), Identified Wildlife guidance and conservation requirements for specific species and ecological communities of conservation concern impacted by forestry activities) and links to E-Flora and E-Fauna (the Electronic Atlas of the Plants and Wildlife of British Columbia).
Develop With Care Guidelines (see BMP's for herptiles and factsheet)
Environmental guidelines for urban and rural land development in BC.
Species at Risk & Local Governments a Primer for BC
Learn what species are at risk in your area, search by name, habitat type, regional district and forest district.

Proulx, Gilbert et al. 2003. A Field Guide to Species at Risk in the Coast Forest Region of British Columbia. Published by International Forest Products and BC Ministry of Environment. Victoria (BC). -

First Edition prepared by: Pamela Zevit, RPBio with Brent Matsuda, RPBio, and contributions from J. Malt, RPBio FLNRO for the South Coast Conservation Program (SCCP) in partnership with: International Forest Products (Interfor) and Capacity Forestry (CapFor). Original funding for this project was made possible through the Sustainable Forestry Initiative(SFI): http://www.sfiprogram.org/

2nd Edition 2014 by Isabelle Houde, RPBio in consultation with the SCCP. Content updated by the Pamela Zevit April 2017