This member of the family Cyprinidae (“carps, true minnows”) is considered a subspecies of the widespread and common Longnose Dace. An artefact of geographic isolation, the Chehalis lineage form evolved in Washington State’s Chehalis River Valley sometime during the Pleistocene glaciations later spreading into other watersheds that opened up as ice retreated. 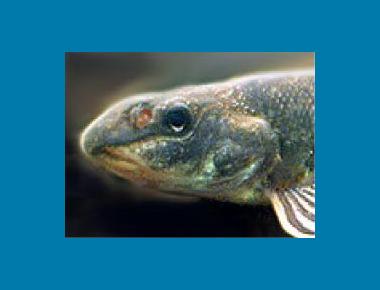 Close up of head Mike Pearson

Nooksack Dace is a small (<10.5 cm) streamlined fish, with a sub-terminal mouth (the snout overhangs the mouth), sometimes with a black stripe in front of the eyes. Scales are small with pale markings visible at the back and front of the dorsal fin when viewed from above. The tail is forked. The rounded back is olive-grey; the belly is silvery-white with a dull brassy stripe along the sides. Lower sides often splashed with dusky speckles. Sexes are alike, but males tend to have longer and darker pectoral fins. Juveniles have a very conspicuous black line on their sides, from snout to base of tail.

As a subspecies of Longnose Dace, close scrutiny is required to distinguish the two. Nooksack Dace has approximately 54 scales along the lateral line and 24 around the caudal peduncle (muscle area just before the tailfin), compared to 67 and 31, respectively, for Longnose Dace. Juveniles of the two forms are harder to distinguish with both having a dark line extending from nose to tail. However adult Longnose Dace are generally an olive-green colour interspersed with brassy or gold scales, especially on the head and ventral area.

Elevations: 50-75 m. This subspecies occurs in about 24 waterbodies between northwest Washington State and Canada. It is extirpated from some tributaries within Canadian (BC) watersheds where it was abundant in the 1960’s. Presently it is restricted to 3 small streams within the Nooksack River drainage system (Pepin Brook, Fishtrap and Bertrand Creeks), in the Abbotsford, Aldergrove and Clearbrook areas and one other river system, the Brunette River in the Brunette Basin in Burnaby.

The species is considered a habitat specialist dependent on stream riffles with loose gravel, cobble or boulder substrate. It can be found in both larger mainstem as well as smaller tributary systems. Adults inhabit riffles and fast glides with loose substrates where they feed on benthic invertebrates. They select shallow, turbulent, waters and rarely occur in reaches with less than 10 percent riffle by length, or in reaches where long stretches of deep pool habitat separate riffles. Juveniles prefer shallow, slow flowing pools with mud or sand bottoms, near riffles. Though Nooksack Dace prefers high quality riffle areas with cool temperatures and adequate riparian cover, it can be found in sections of stream with poor vegetative or instream cover (e.g. where streams flow through agricultural or industrial areas). This subspecies has high home range fidelity, most adults appear to range less than 50 m annually

This subspecies form forages on benthic macroinvertebrates associated with flowing waters such as the larvae of caddis, mayfly, midges and adult riffle beetle as well as annelids (worms).

Guidelines for the Collection of Nooksack Dace
For further information see:
Aquatic Species at Risk - Nooksack Dace
BC Species and Ecosystems Explorer: Species and Ecosystems Search
A source for authoritative conservation information on thousands of plants and animals and hundreds of ecological communities in BC. From here connect to all provincial and federal recovery plans (including the SARA Registry), COSEWIC (Committee on the Status of Endangered Wildlife in Canada), Identified Wildlife guidance and conservation requirements for specific species and ecological communities of conservation concern impacted by forestry activities) and links to E-Flora and E-Fauna (the Electronic Atlas of the Plants and Wildlife of British Columbia).
British Columbia’s Coast Region Species & Ecosystems of Conservation Concern

Species Profile prepared by: Pamela Zevit with Mike Pearson for the South Coast Conservation Program (SCCP) in partnership with: International Forest Products (Interfor), Capacity Forestry (CapFor). Funding was made possible through the Sustainable Forestry Initiative (SFI): http://www.sfiprogram.org/ Updated and revised by: Isabelle Houde, RPBio in consultation with the SCCP. Part of the National Conservation Plan, project was undertaken with the financial support of the Government of Canada. Dans le cadre du Plan de Conservation National, ce projet a été réalisé avec l’appui financier du Gouvernement du Canada. Every effort has been made to ensure content accuracy. Comments or corrections should be directed to the South Coast Conservation Program: info@sccp.ca. Content updated March 2015. Image Credits: Nooksack Dace: Mike Pearson, Longnose Dace: Peter Koetsier Boise State University, Habitat: Mike Pearson (riffle), City of New Westminster (backwater). Only images sourced from “creative commons” sources (e.g. Wikipedia, U.S. Government) can be used without permission and for non-commercial purposes only. All other images have been contributed for use by the SCCP and its partners/funders only.