This member of the family Vespertilionidae (“vesper bats”), also known as “evening” or “common” bats is one of the largest and most commonly known groups of bats. Four species of long-eared myotis occur in BC. Recent genetic work (2016) suggests that these two species are actually one in the same and the Keen's species status should be eliminated. 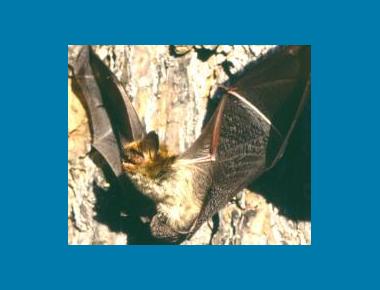 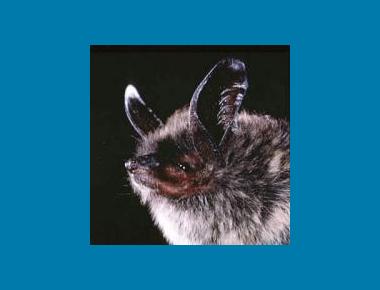 Pelage (fur) is dull olive to rich, glossy brown on the back with darker indistinct spots on the back of the shoulder; underside paler. The long ears extend about 4 mm beyond the tip of the nose when pressed forward; the tragus (ear fold) is long, narrow, and pointed. Ears and wing membranes are dark brown. A fringe of tiny hairs on the outside edge of the tail membrane is visible with a hand lens. The skull has a steep forehead; the rostrum (snout) is short and rises abruptly giving it a shrew like face. Regarding the special concern status, this species is listed as Schedule 3 on the SARA Registry and is still awaiting reassessment based on new COSEWIC criteria.

Elevations: 0-1100 m. Keen’s Myotis has a strong association with cave features (i.e. karst caves) with warm, moist microclimates. Known distribution is along the Coast Region mainland as far north as the Stikine River, on the Haida Gwaii Archipelago (where it is the only long-eared Myotis species and the only M. keenii maternal colony is located) and Vancouver Island (i.e. coastal and upland forested zones associated with karst caves). *For information on locations of karst cave systems in BC see the profile for the Quatsino Cave Amphipod.

Cool, wet, coastal montane forests and karst cave features are typical roosting associations. Bat activity appears seasonal, with emergence (“swarming”) from mid to high elevation caves occurring from July to September. Foraging covers a broad range of open areas from intertidal zones and estuaries areas to upland forest clearings, edge areas, wetlands and freshwater riparian zones. Myotis species show high site fidelity to maternity roost and hibernacula sites. Important habitat features include tree cavities, bark (on older wildlife trees) and rock crevices, and caves more than 100 m in length and above 400 m elevation, with stable 2.4-4°C temperatures and 100% humidity. Forage and roost buffer requirements are typically between 30 and 50 ha but will depend on site-specific factors including the type of feature (cave vs. tree), location of roosting trees, presence of wetlands or lakes, and potential movement corridors.

Small size, low wing-loading ratio, and very low intensity echolocation calls makes Keen’s Long-eared Myotis well adapted for flying and foraging on insects in mature and old growth forest stands. Insects, especially spiders and moths form a large part of the diet. Other prey items include flies, lacewings and dobsonfly. Food is captured in flight by scooping it up with wing or tail membranes or snatching it directly via the mouth mid-air or off of foliage.

Females do not breed until second summer. Fertilization is delayed until females leave the hibernacula in the following spring for maternity colonies.

Knowledge gaps in occurrence, population, and abundance contribute to ongoing conservation and management challenges.
Dependency on tree cavity roosts associated with intact mature forest stands as well as forested karst cave sites used for breeding and hibernation makes this species vulnerable to habitat loss due to logging and other resource extraction practices.
Alteration of sensitive moisture and temperature micro-climate conditions within caves from intensive recreational caving, mineral exploration and resource extraction in and around cave systems
White-nosed syndrome, a fungal pathogen potentially spread by human activities though not yet detected in BC is decimating cave dwelling bat populations in eastern North America and is of significant concern.
Prey loss or pesticide build up in the food chain from application of pesticides used to control insect pests in silviculture/agricultural pest control practices, many of which may be part of the bat’s diet.
Wind farms are an unknown factor in respect to how they may affect non-migratory species such as Keen's Myotis

Apply conservation and management recommendations as set out in the Best Management Practices for Bats in British Columbia (2016, see link). Integrate complimentary objectives found in “Accounts and Measures for Managing Identified Wildlife – Accounts V. 2004. Keen’s Long-eared Myotis, Myotis Keenii,” the "COSEWIC assessment and update status report on Keen’s long-eared bat Myotis keenii in Canada” and provincial guidelines for the management of Karst systems. Assess, inventory and monitor using methodology setout in the RISC standards #20 Inventory Methods for Bats Version 2.0. This species is Identified Wildlife under the BC Forest and Range Practices Act and subject to protections and prohibitions under the BC Wildlife Act. Habitat for this species may also be governed under provincial and federal regulations including the Fish Protection Act and Federal Fisheries Act as well as Regional and local municipal bylaws.

Western Bat Working Group Species Accounts
For further information see:
South Coast Bat Conservation Society
The South Coast Bat Conservation Society, formerly South Coast Bat Action Team, was formed in 2011 to provide bat monitoring and public education in south coastal BC.
Community Bat Programs of BC
Community Bat Programs help people and bats. Get help gently and safely evicting bats or get involved with bats through citizen science.
Western Bat Working Group
The Western Bat Working Group (WBWG) is a partner in the Coalition of North American Bat Working Groups. The WBWG is comprised of agencies, organizations and individuals interested in bat research, management, and conservation from 13 western States, the Provinces of British Columbia and Alberta, and Northern Mexico.
Best Management Practices for Bats in British Columbia
The British Columbia Ministry of Environment has developed this document to provide development proponents, researchers, consultants and British Columbia ministry staff with information about the potential impacts of resource development and other human activities on the bats and their habitats in British Columbia. These documents also provide guidelines on how to minimize those impacts.
BC Species and Ecosystems Explorer: Species and Ecosystems Search
A source for authoritative conservation information on thousands of plants and animals and hundreds of ecological communities in BC. From here connect to all provincial and federal recovery plans (including the SARA Registry), COSEWIC (Committee on the Status of Endangered Wildlife in Canada), Identified Wildlife guidance and conservation requirements for specific species and ecological communities of conservation concern impacted by forestry activities) and links to E-Flora and E-Fauna (the Electronic Atlas of the Plants and Wildlife of British Columbia).
British Columbia’s Coast Region Species & Ecosystems of Conservation Concern

Polster, D. et al. 2006. [Internet] Develop with Care: Environmental Guidelines for Urban and Rural Land Development in British Columbia. Prepared for the BC Ministry of Environment. Victoria (BC).

Proulx, Gilbert et al. 2003. A Field Guide to Species at Risk in the Coast Forest Region of British Columbia. Published by International Forest Products and BC Ministry of Environment. Victoria (BC).

Prepared by: Pamela Zevit of Adamah Consultants for the South Coast Conservation Program (SCCP) in partnership with: International Forest Products (Interfor), Capacity Forestry (CapFor) and the BC Ministry of Environment (BC MoE). Review provided in 2011 by Susan Leech. Original funding for this project was made possible through the Sustainable Forestry Initiative (SFI): http://www.sfiprogra m.org/. Updates were made possible through the Government of Canada's Habitat Stewardship Program for Species at Risk

Every effort has been made to ensure content accuracy. Comments or corrections should be directed to the South Coast Conservation Program: info@sccp.ca. Content updated July 2017.