This gregarious member of the family Hirundinidae (swallows and martins), is often associated with noisy colonial nesting sites in barns and under the eaves of buildings. A neotropical migrant, over-wintering in Central America and Mexico, Barn Swallow in BC migrate via Washington State and the Pacific Flyway. 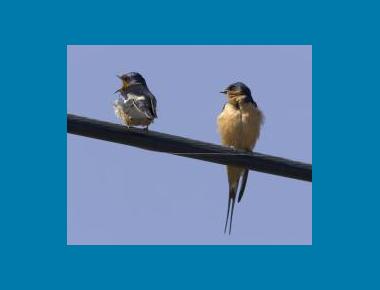 Dorsal plumage on adults is a metallic blue-black with a pale beige/russet breast, chin and bib. The long, deeply-forked tail feathers are a key feature to identify this species from other swallows. Males and females are similar in appearance, though males are more vibrantly colored and have longer outermost tail feathers (retrices), with white spots (lacking in females). Males with the longest outermost tail feathers tend to be more successful at securing mates and have higher survival rates. The only member of the genus Hirundo in BC, Canadian Breeding Bird Survey data suggests Barn Swallow have experienced a 2.9% annual decline over the past 30 years, a decline that has steepened in the last decade to 7.6% annually. 321 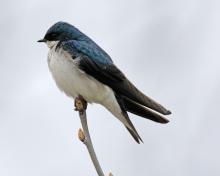 Several species of swallows, swifts and martins can be mistaken for Barn Swallow. The similarly coloured, but stouter Cliff Swallow or the high flying Violet-green and Tree Swallows often occupy similar habitats. The open, cup-shaped nest made of mud flakes, feathers and organic matter is a characteristic distinguishing Barn Swallow from other species.

Nests are usually constructed on vertical surfaces under eaves or porch covers, barns or other buildings, on light fixtures, under bridges or in caves or cliff crevices. This species commonly refurbishes old nests from year to year and returns to the same nesting area in successive years. Young of the year often return to within 30 km or closer to natal sites. This species has been known to adapt to and utilize urban landscapes such as parking lots, warehouses and residential structures such as outdoor lighting fixtures. Barn Swallows construct nests formed from mud pellets that may be collected from riverbanks, wetlands or exposed soils up to a kilometer from the nest site. Nests are lined with grass, animal hair, and feathers. Nests built on man-made structures (e.g. under eaves, bridges, docks) require a ledge to support the nest, a vertical wall to which the nest can be attached and a roof or overhang to protect from precipitation.

An aerial insectivore, Barn Swallow are proficient consumers of a diverse range of insects, including mosquitoes, flies and moths. Prey is captured in midair, often over water, open fields or roads. Diet is also supplemented (particularly during bad weather) with berries, seeds, and dead insects found on the ground. Swallows will fly several kilometers from their nest sites to forage. During long periods of continuous rainfall adults may find it difficult to find prey items, effecting young of the year survival rates. Swallows drink mid-flight, dipping their bills to the waters surface as they fly over.

Spring adult migration from wintering areas in Central and South America may be impacted by weather events affecting the Pacific Flyway. If food sources are abundant two broods per season are common, with the original nest being reused for the second brood and being repaired and reused in subsequent years. The female lays two to seven, but typically four or five, reddish-spotted white eggs.[2] The clutch size is influenced by latitude, with clutch sizes of northern populations being higher on average than southern populations. Incubation period is normally 14–19 days, with another 18–23 days before chicks fledge. The fledged young stay with, and are fed by, the parents for about a week after leaving the nest. Occasionally, first-year birds from the first brood will assist in feeding the second brood.

Loss of nesting habitat through the conversion and demolition of barns and other rural structures to urban and suburban uses.
Distribution coincides with areas undergoing significant urbanization and natural habitat loss including draining and infilling of wetlands.
The use of pesticides to control plant and insect pests may have lethal and sub-lethal effects as well as impacting reproductive success and food availability.
Young swallows may die from nest infestations of blowfly and other parasitic insects and mites. Other deaths of young occur from severe hot or cold temperatures, fallen nests, and introduced predators, including rats, and grey squirrels.
Swallows, in search of flying insects are often attracted to open roads and road verges. Mortalities from cars may increase as natural food producing habitats decline and road densities increase with development.
Barn Swallow nests are often removed or barriers are installed to prevent access to historic nest platforms due to noise and dropping buildup during the breeding season.
Light pollution in and around urban centres

Conservation actions should address threats and limiting factors identified in the COSEWIC assessment and status report on the Barn Swallow Hirundo rustica in Canada (2011). Assess, inventory and monitor using methodology set out in the RISC standards #16 Inventory Methods for Swallows and Swifts (Version 2.0). For swallows and other species that have extensive distances between nesting and foraging areas, determination of individual populations should be based on nest sites and nest colonies, not on locations of foraging individuals even if they are 5km apart. This species is subject to protections and prohibitions under the Federal Migratory Birds Convention Act and Species at risk Act as well as the BC Wildlife Act. Habitat for this species may also be governed under provincial and federal regulations including the Fish Protection Act and Federal Fisheries Act as well as Regional and local municipal bylaws.

Are Aerial Insectivores Being Bugged Out?
Special feature for BirdWatch Canada
For further information see:
The British Columbia Swallow Conservation Project
Swifts and Swallows Bird Studies Canada
Bird Studies Canada and our project partners offer resources to help landowners manage and enhance habitat for swallows and swifts on their properties.
Barn Swallows in Decline in North America (video)
BirdLife International Barn Swallow Hirundo rustica
BC Species and Ecosystems Explorer: Species and Ecosystems Search
A source for authoritative conservation information on thousands of plants and animals and hundreds of ecological communities in BC. From here connect to all provincial and federal recovery plans (including the SARA Registry), COSEWIC (Committee on the Status of Endangered Wildlife in Canada), Identified Wildlife guidance and conservation requirements for specific species and ecological communities of conservation concern impacted by forestry activities) and links to E-Flora and E-Fauna (the Electronic Atlas of the Plants and Wildlife of British Columbia).
British Columbia’s Coast Region Species & Ecosystems of Conservation Concern

Polster, D. et al. 2006. [Internet] Develop with Care: Environmental Guidelines for Urban and Rural Land Development in British
Columbia. Prepared for the BC Ministry of Environment. Victoria (BC).

First Edition prepared by: Pamela Zevit, RPBio for the South Coast Conservation Program (SCCP) in partnership with: International Forest Products (Interfor) and Capacity Forestry (CapFor). Original funding for this project was made possible through the Sustainable Forestry Initiative(SFI): http://www.sfiprogram.org/