A number of guidelines and best practices have been developed in BC as well as nationally or internationally for the conservation and recovery  for species at risk, rare plants and ecosystems. Not all of these methods or techniques are tied to regulatory requirements but they are based on the best available science on species at risk, protecting their critical habitat needs or maintaining the ecological integrity of local landscapes. The SCCP has gathered the best of BC and beyond that provide relevant applications to South Coast species and ecosystems, or represent transferrable approaches and applications from other jurisdictions. The SCCP has been given special permission to host some of the materials which have been produced by regulatory agencies in BC, but have yet to be published through government sites. And don't forget to check out the SCCP's own made-for-the-South Coast land use resources and guidance tools found on our pages for Local Governments and Landowners and Restoration Toolkit.

For the most up to date information regarding guidelines and regulatory requirements, please contact the relevant ministries/staff with the Province of BC, Environment & Climate Change Canada or the Department of Fisheries & Oceans Canada. Further information can be found on our contacts page.

Spotlight on the South Coast and BC 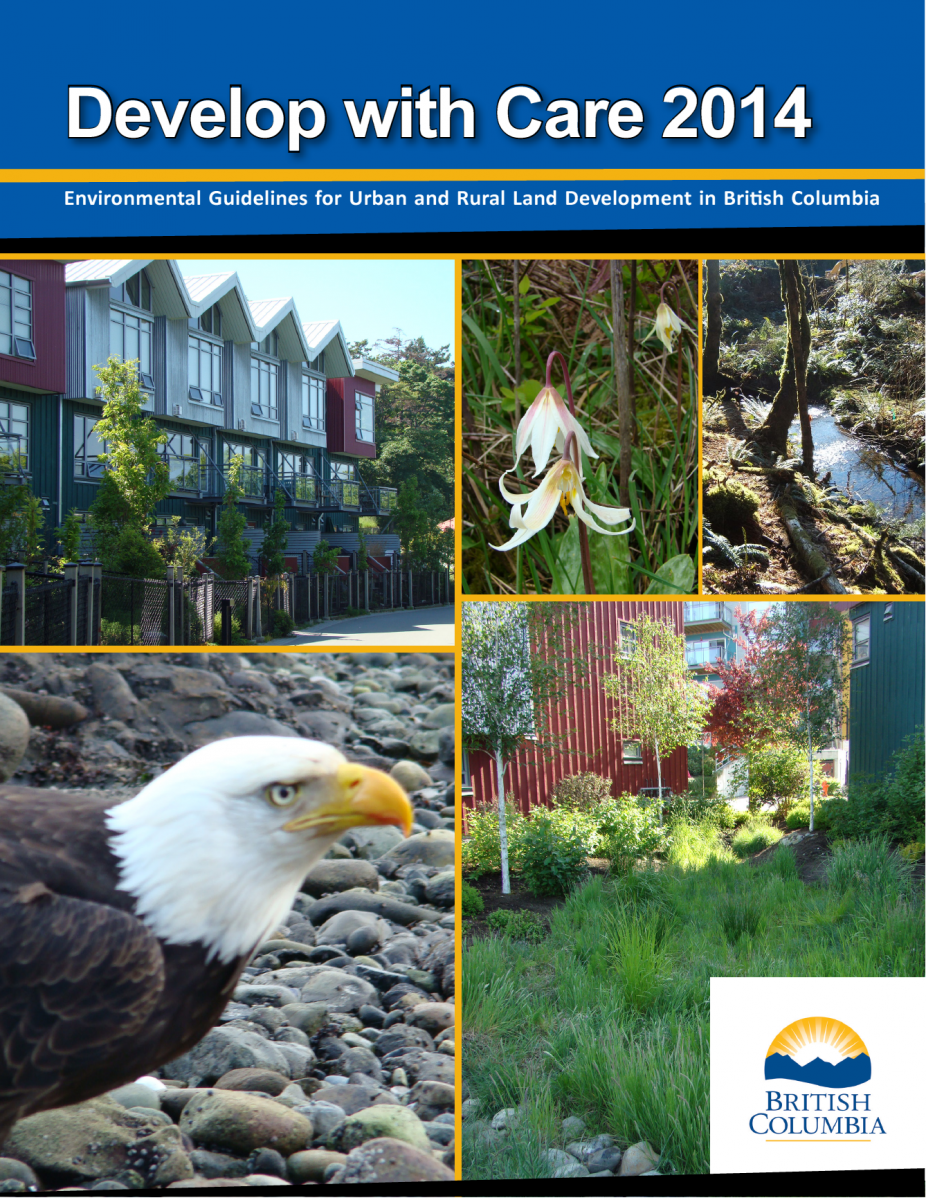 Farming With Barn Owls In BC - Best Practices for Land Management: Found on the South Coast with the odd occurrence on southeast Vancouver Island, Barn Owl populations are declining, mainly as result of reduced food abundance caused by the conversion of grass habitats to urban uses, changes in agricultural practices, loss of nest sites as old barns are demolished and road mortality. Am emerging threat are new, powerful rodenticides used in pest control, which may not directly kill animals that prey on contaminated rodents, but can accumulate in a predators internal organs leading to "sublethal" effects. This new best practices pamphlet was developed by biologist Sofi Hindmarch as a resource on the conservation of this threatened species in BC.

Science-Based Guidelines for Managing Northern Goshawk Breeding Areas in Coastal British Columbia: These guidelines were previously unavailable or inconsistent and did not provide a thorough review of the scientific literature. The best management practices presented here are intended for use by qualified environmental professonals and managers when undertaking industrial activities, primarily forestry, around Northern Goshawk breeding areas within coastal British Columbia.

Guidance on Coastal Tailed Frog Monitoring of Run-of-River Hydropower Projects (2014): The Province of BC has been implementing a collaborative study to monitor tailed frog tadpoles and habitat conditions at several facilities in the South Coast, using a Before-After-Control-Impact (BACI) design to assess if hydropower construction or operation affects tadpole survival, distribution, or abundance. This document summarizes the project study design and field sampling methods, as well as the first year of data collection in 2013. See also DRAFT Power Analysis for Coastal Tailed Frog Monitoring of Run-of-River Hydropower Projects.

Testing the use and feasibility of using Unmanned Aerial Vehicles (UAV) to survey and monitor for amphibian egg laying: A technical guide for the use of Unmanned Aerial Vehicles (UAV, drone) for wildlife research. Developed for the Oregon Spotted Frog Recovery Team, this document introduces biologists to the legislative, logistic and technical aspects of using a DJI Phantom Vision drone for amphibian egg mass surveys.

Safe Frogwatching Protocols: Chytrid fungi are widespread in the environment where they act as decomposers of keratin, chitin, cellulose, and other plant material.Since amphibian chytrid (Batrachochytrium dendrobatidis = Bd) was described in 1999, it has been spread to many amphibian populations around the world, including Canada and BC, affecting common and at risk species and having profound effects on amphibian health. While Bd is probably moved naturally from one water body to another on dispersing amphibians, or on waterbirds and flying insects, it is important to insure that the public and researchers are not spreading Bd between sites as part of stewardship activities, research ormonitoring programs.

Habitat Management Guidelines for Amphibians and Reptiles of the Northwestern United States and Western Canada: Developed by the Partners in Amphibiam and Reptile Conservation (Northwest Chapter), these guidelines were developed a series of regionally-specific best management practices, or Habitat Management Guidelines (HMGs) to provide proactive guidance for improving the compatibility of approachland management practices with these animals.

A Guide to Multi-Species Restoration on the South Coast of BC: A discussion and case stuy guide on taking a multi-species approach to species at risk habitat restoration. Developed by K. Welstead, Province of BC.

Approved Work Practices for Managing Riparian Vegetation: A Guide to Incorporating Riparian Environmental Concerns into the Management of Vegetation in BC Hydro’s Transmission and Distribution Corridors

Looking for animal care and wildlife guidelines for reducing conflicts, handling, inventorying or research on various species of wildlife? Check out the following sites:

American Society of Ichthyologists and Herpetologists (amphibians, reptiles and fisheries)

For a further selection of BMPs and guidelines from outside of BC, Canada or North America, check out our picks below!

Literature Review: Pollinator Habitat Enhancement & Best Management Practices in Highways Rights of Ways
Roadside habitat can include forage for food and breeding or nesting opportunities. Roadsides extend across a variety of landscapes and can aid dispersal of pollinators by linking fragmented habitats. By acting as refugia for pollinators in otherwise inhospitable landscapes, roadside habitat can contribute to the maintenance of healthy ecosystems and provision of ecological services such as crop pollination services.

The butterfly handbook (UK) mitigating the impacts of roads on butterfly populations
Butterflies are highly sensitive indicators of the environment and we know that conservation measures for this group will help many other less well-known components of our biodiversity. Road verges already provide valuable habitats for a wide range of species but this report shows how they can be made even better and contribute an ever more important role in the future.

Improving Environmental Impact Assessment practice: Guide for publishing primary biodiversity data
Knowledge about the identity and occurrence of organisms forms the backbone of our understanding of the biological world, and is essential for monitoring the state of natural ecosystems, for developing sound environmental management policies and making ecologically sustainable development decisions. Ideally, biodiversity-inclusive "EIAs" should: (a) use biodiversity information to determine the biological or ecological sensitivity of a development site, and (b) generate new biodiversity records about these sites.

Guidelines for Mitigation Translocations of Amphibians: Applications for Canada’s Prairie Provinces
Developed by the Centre for Conservation Research, Calgary Zoological Society. Calgary, Alberta, Canada. This guide provides general information about beneficial management practices and amphibian translocation standards. The information within comes from a variety of sources, and will be updated as we gain a greater understanding of the risks and benefits of amphibian mitigation translocations, and as improved methods develop.

Urban Protected Areas: Profiles and best practice guidelines
Designed primarily for managers of urban protected areas and those responsible for protected area systems, but written in non-technical language with a broader readership in mind. This volume emphasizes management approaches that are especially relevant to urban protected areas. Since these areas, and the political and social contexts in which they reside, vary greatly, it does not provide detailed recommendations, but instead it: sets out general guidelines; offers examples of problems, opportunities and solutions; and lists sources of further information and assistance.