Attending a recent outing to learn about the habits and habitat of our most endangered amphibian, the Oregon Spotted Frog, made me reflect on the issues surrounding our native frog species and their invading cousins. How well do we really understand how invasive and native species of frogs interact, or the implications of the expanding range of the Green Frog or American Bullfrog? Here is some food for thought:

The Ranidae: The family Ranidae represents true frogs and contains 337 species worldwide and 9 species in Canada. This family has 16 genera in the world, but only 2 genera, Rana and Lithobates, occur in Canada (source Catalogue of Life  and Amphibia Web 2019) . Image: iNaturalist

Identifying Characteristics: These are medium to large-sized frogs that have a bony breastbone, a distinct tympanum (ear structure), dorsolateral folds (folds of skin above the rib cage that extend from the waist towards the eye, sometimes wrapping around the tympanum), and long powerful legs with extensive webbing on the hind feet. They are excellent jumpers and typically live at the water's edge (e.g. marshes, ponds, ephemeral wetlands), entering aquatic habitats it to mate, forage for prey, or to lee from predators For the South Coast’s Oregon Spotted Frog, the preferred route is the life aquatic in contrast to the Northern Red-legged Frog which can spend extensive time in terrestrial environments (e.g. surrounding forests or meadows) and can travel significant distances between aquatic breeding and upland foraging and hibernation areas.

Feeding: Except for their tadpole stage, these frogs are carnivorous, eating insects, fish, and crustaceans. The larger species (e.g. the American Bullfrog) even eat small mammals, birds, and other frogs (including their own species!), and Oregon Spotted Frogs have been dicumented predating on Western Toad tadpoles (talk about one species at risk eating another!).

Mating: Mating occurs in the spring (into early summer for American Bullfrogs), beginning with the males calling (the Northern Red-legged frog calls underwater). Larger species lay up to 20,000 eggs which hatch within approximately a month. Tadpoles metamorphose into froglets in 6 to 24 months, depending on the species and conditions.

Of the nine 'Ranids' found in Canada, six species are in the genus Lithobates and three species are in the genus Rana. "The name Lithobates is derived from litho (stone) and the Greek bates (one that treads), meaning one that treads on rock, or rock climber. A bit bizarre consiering these species' aquatic nature? Rana, is the Latin word for frog and is a genus commonly known as the Holarctic true frogs, pond frogs or brown frogs.

The two introduced species, the Green Frog and American Bullfrog are native to Eastern and Central North America. Their history in BC is similar to the story of other invasive species, e.g. the result of unintentional escapes, purposeful introductions (in the case of the American Bullfrog farming to produce frogs legs), as hoped for biological (pest) control, or as unnoticed hitchhikers in the movement of live animals across borders or natural range boundaries. These two species came primed with a competitive edge! They are both urban adapters that can tolerate much more degraded environments than our native Ranids, as well as targeting similar food sources throughout their life cycle, and like other invasive species they can be vectors for pathogens which can and are having profound effects on native amphibians (e.g. Chytrid fungus). All of which makes them a significant concern in native amphibian conservation efforts.

A great deal of research has, and is being conducted to try to sort out the interactions and ramifications of the introduction of these two invaders on native fauna and the ecosystems they share. Much of the media hype has focused on the American Bullfrog’s voracious appetite (who can forget the famous headlines from Langley BC about the cat attacked by a giant bullfrog!), a reputation based on fact. They eat just about anything they can catch and fit in their mouths from smaller native frog species and baby Western Painted Turtles, to ducklings and songbirds, to smaller members of their own species. And while the impacts of bullfrogs on native fauna may be more obvious, the other species in this story, the Green Frog is a little harder to parse out. This species was likely introduced to BC through pet or fish bait trade, rather than as a potential exotic culinary delight like the bullfrog. Juvenile and adult Green Frogs are known to predate on small fish and other amphibians (native and or their own species and

possibly even small bullfrogs), but that is not likely resulting in the extirpation of local native frog populations. Rather their ability to produce large numbers of offspring and competition for similar forage items preferred by native frog species such as insects, aquatic invertebrates and algae and detritus (i.e. for tadpoles) may be driving displacement and then replacement in habitats that support native and introduced frog species.

Where preferred habitat has become so degraded and or fragmented that native frog species have become extirpated, Green Frogs and American Bullfrogs appear to become easy replacement species (the exception being situations where aquatic habitat is too shallow or only seasonally inundated).

We need to remain vigilant in respect to monitoring how introduced species are interacting with their environment in existing and newly established populations. This latter situation is key. Referred to as Early Detection, Rapid Response or ‘EDRR” in invasive species management parlance, it reflects the critical investment and actions needed when we know that an introduced species is having an impact on native species. For species like the Green Frog and American Bullfrog, this means culling (direct lethal control) when new populations are identified (and before they get large enough to be established), combined with concerted outreach and education with the public to avoid future spread. As an example schools have been documented as a pathway for introduction of non-native frogs, turtles, fish and crayfish, including BC, so working with formal and informal educators and citizen science groups is essential. 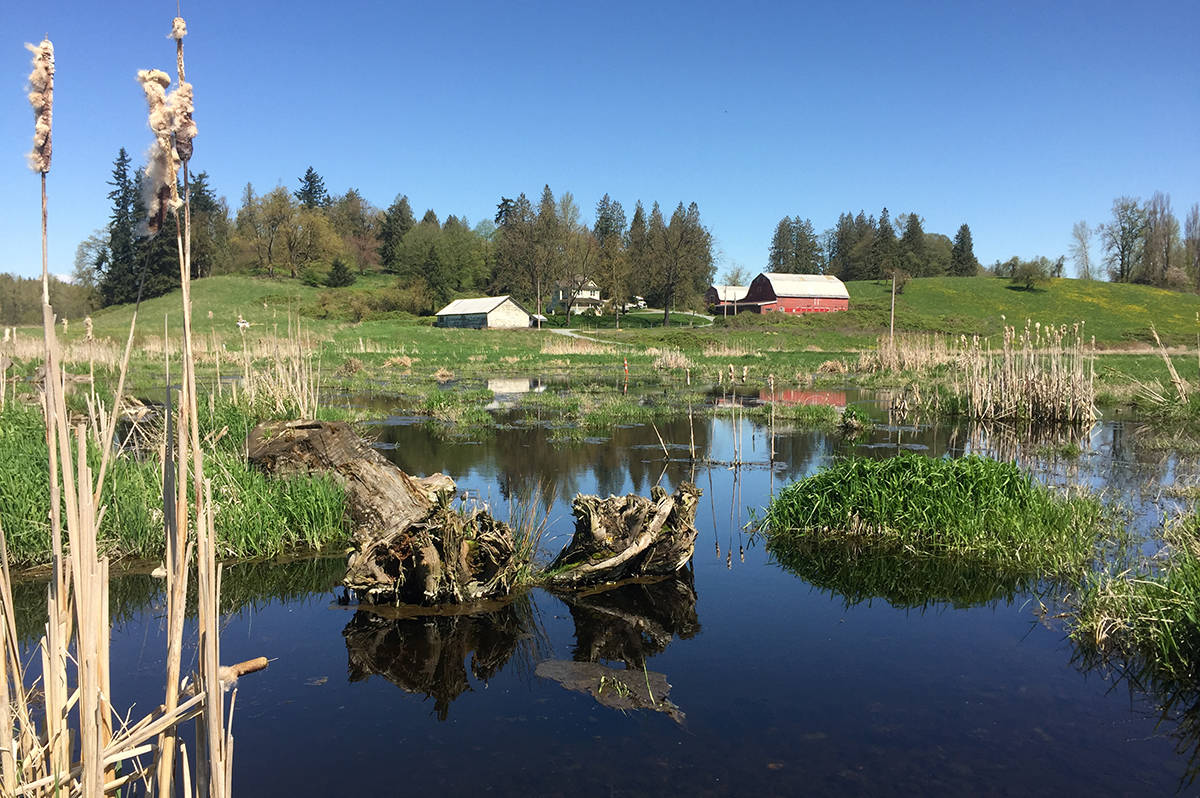 It also means focusing on ensuring that we prevent these species from spreading to new habitats (and making it harder for them to persist in existing ones) through novel approaches to habitat restoration and enhancement. Instead of creating artificial wetlands that consist of deep ponds with year-round water, focus on complex, connected shallow-water, and even ephemeral wetlands that will provide habitat more preferable to native amphibian species.

The unintended consequences of introduced species are varied and complex. And as with many similar situations, there is often no single solution. But to do nothing is not an option, and acting in hindsight as with many examples in conservation is astronomically more expensive than to take preventative measures. There is no plan “B” if we allow introduced species to push our native species to extinction, and no excuse when we had the opportunity to prevent it in the first place.

To find out more about frogs at risk of the South Coast, check out the individual profile pages for the Northern Red-legged Frog, Oregon Spotted Frog, Coastal Tailed Frog and Western Toad. Looking for a great summary ID guide to carry info on the go? Download our Frogs and Toads of BC's South Coast and Aquatic Amphibian Eggs of BC's South Coast ID  guide. Get them both and species profiles on your mobile device with our and South Coast Species at Risk Finder App for Android and iOS.

How the American bullfrog is eating its way into BC